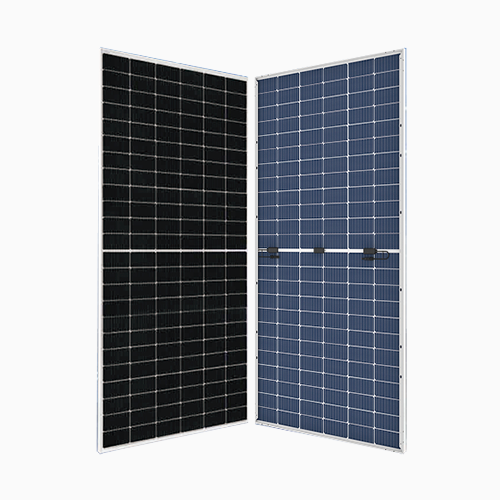 The bifacial solar module is suitable for the general application scenarios of photovoltaic power plants. For roof distribution, bifacial module can be used for flat roofs, and high reflective finishes are recommended, not suitable for tile installation of color steel tile roof.

A bifacial solar panel / module is designed with exposed solar cells on both sides of the panel. This allows sunlight to reach both the front and back of the solar cells for maximum solar energy harnessing.

This varies from traditional solar panels which are designed only to capture sunlight through their front side. In most cases, monofacial solar panels come with a frame and a backsheet made of polymers used to protect and isolate the electrical circuitry of the solar panel.

Modern production techniques make half cut solar cell panels more worthwhile. A solar cell is cut in half, it will produce half as much current and one fourth as much resistance. However, there’ll be twice as many of them. So, if they are wired up to operate like a standard solar panel, the current would be the same but with half the resistance. This lower resistance reduces electrical losses and improves panel efficiency. Thus half-cut cells divides the internal current in the system and improves its performance, longevity and shade tolerance. As power loss is proportional to current, half-cut solar panels reduce the power loss by a factor of 4 which increases the power output.

Why half-Cell is now more in Solar Technology?

If you have followed our most-efficient commercially available solar panel list, Half-Cut (Half-Cell) is one of the most efficient and powerful technologies in PV modules manufacturing. Now let’s briefly check the secret behind this choice.

Cutting a solar cell so exactly that it is divided into two same halves has been proven to be an effective way to “lower resistive power loss”. Each of the sliced cells, half-cut cell, generates half the current of a full cell. Respectively, due to the direct relationship of electrical losses with the square of the generated electric current in a cell, this results in reducing resistive losses in the interconnection of solar modules.

Less resistance between the cells increases the power output of a module. It is also worth noting that two halves of cells are connected in series to each other in PV module manufacturing. Therefore, a solar module with half-cut cells generates more power than a standard module with full cells.

So, by cutting solar cells in half, the current generated from each cell is halved, and lower current flowing leads to lower resistive losses as electricity moves throughout cells and wires in a solar panel. Higher shade tolerance Half-cut cells are more resistant to the effects of shade than traditional solar cells.

The construction of Bifacial solar panels is somewhat similar to that of mono-facial panels.The only difference that makes bifacial different from them is that

instead of using a back sheet/reflective coating, here transparent glass is used.

the risk of broken finger grids and microcracks.

Non-destructive cutting can improve the mechanical

strength of cells, limit the risk of invisible fissures and

When hot spots occur, the hot spot temperature of a half-cut module is 10-20℃ lower compared to a

normal module in the same environment and application scenario.

Current running through the module is halved as the module uses half-cut cells, the lower cell energy

Not affected by shading

When the lower half of a half-cut module is shaded by horizontal PV arrays, power generated by

the upper half will not be affected.

In high temperature and high irradiation environments, the output of a half-cut module is higher.

Monofacial solar panel only absorbs sunlight from the front surface of the solar panel while the bifacial solar panel features solar cells on both sides. As you can imagine, when you are producing energy from both sides of the panel, you increase the amount of electricity that can be produced. And that's precisely why KSUNsolar and all other manufacturers introduced bifacial solar panels. Because you get more out of them, which means more financial benefits from your solar energy system.

Instead of having a back sheet like monofacial, bifacial solar panels have a transparent back sheet, so both sizes of the panel can capture the sunlight. This allows the panels not only to absorb direct sunlight but also reflected light. It is typically only installed on the tiled racking system or ground bifacial solar mounting system because they produce more energy when the back side of the panel can capture more reflected light. The higher the bifacial module is tilted, the more power it produces from the bifacial panel.

How Much More Electricity Do Bifacial Solar Modules Produce ?

The main advantage of bifacial panels is the additional production. While most properly-designed bifacial solar systems should produce more electricity than a monofacial system,

don’t expect production to double. Because the backside is using reflected energy, it will inevitably produce less than the front side that’s receiving direct sunlight.

Because there are so many factors, like installation angle and surface albedo, it’s hard to give a solid estimate on how much extra electricity bifacial panels will generate.

Most sources say you could see an increase in production between 5% and 30%.

All KSUN’s product series have been placed on the list of ‘Enterprises with Regulated Conditions in the PV Industry’ released by the Ministry of Industry and Information Technology, and all its products have achieved certification from global entities such as TUV, CQC, UL, CSA, CEC, BIS, KS, INMETRO, SII, and MCS. Adhering to its operational philosophy of “focusing on quality and seeking technology-driven development,” the company has been creative in product design in order to address the needs of various markets and customers.

In addition to its latest products, KSUN can also offer tailored versions of previous products, according to customers’ special requests.

We'll help you figure out your solar power needs !

If you have any inquiry of our products, please do not hesitate to send a message here,  we will reply you in 24 hours !  Your detailed requirements will get more exact answer.

THE QUALITY THE SURVIVAL, BE GOOD FAITH BE LONG 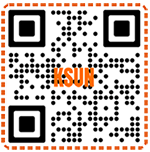 Chat Online
Chat Online
Leave Your Message inputting...
hello
Hello, please leave your name and email here before chat online so that we won't miss your message and contact you smoothly.
Sign in with: